Feeding chickens can combat climate change…who knew? (We did.) 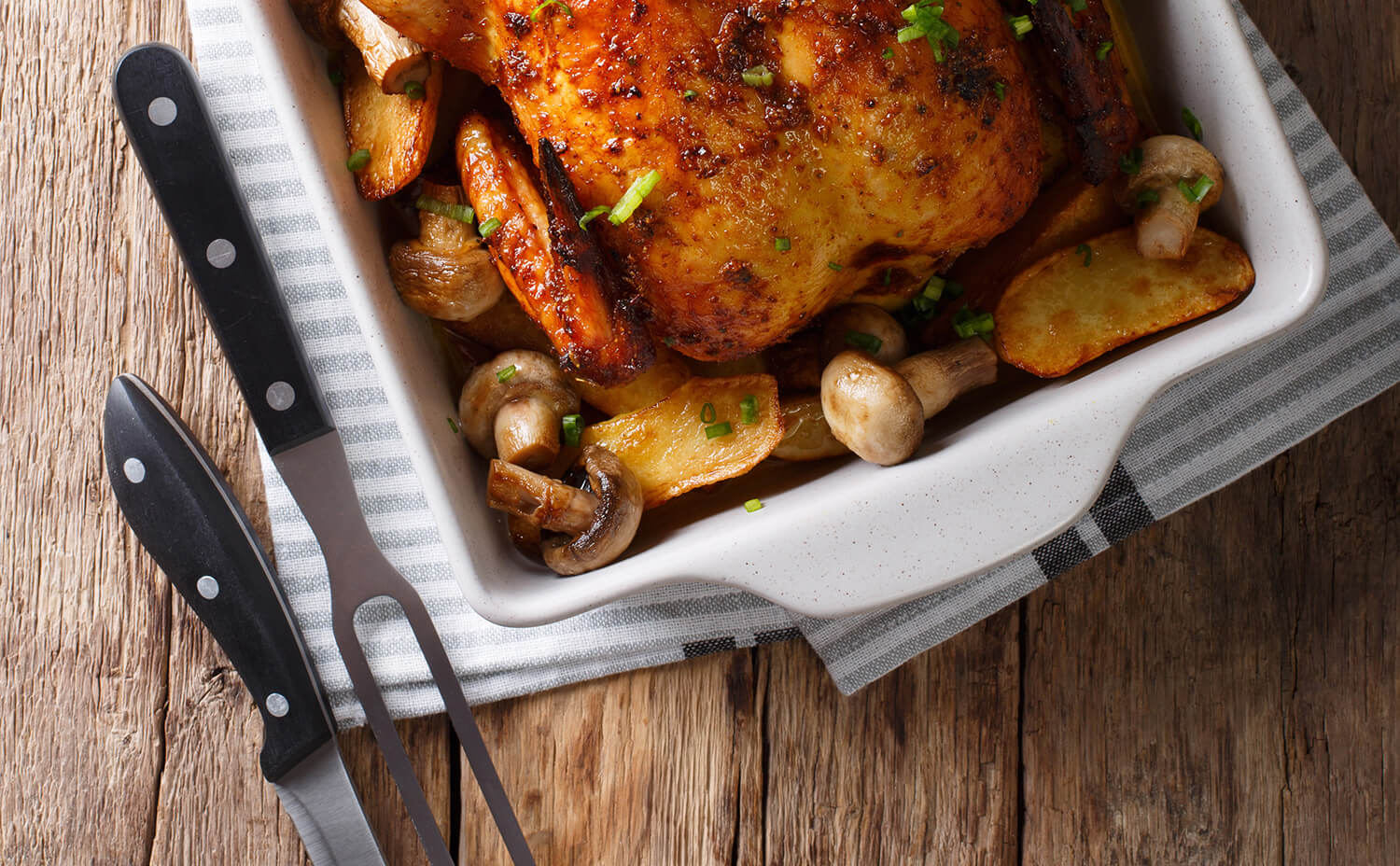 Want the TL;DR version? Click here for the roundup.

Every year, grocery stores discard 43 billion pounds1 of food, with almost all of that going into landfills. Food is wasted on a major scale, and the effects on the environment are bleak. There’s no reason Americans should be throwing away almost twice2 as much food as any other developed country. So at Do Good Chicken, we created a solution.

We decided to take the surplus food from grocery stores and turn it into nutrient-dense feed for chickens. Chickens eat the surplus, then we sell that chicken at the very same grocery stores. Just like that, we created a system that works for a circular economy, combating food waste.

Food waste: It’s kind of a big deal. But why?

As a consumer, you might feel guilty about food waste when you toss your limp vegetables or scrap that not-so-great meatloaf into the garbage. And while it’s true that there are countless ways you can reduce food waste as an individual, the problem is far bigger. Here’s how food waste affects the world on a large scale:

It’s a moral issue. In 2021, American food banks are estimated to fall short by 6-8 billion meals3 — leaving many people food insecure. The first and most efficient way to end food waste is to instead feed it to hungry people. (While grocery stores can legally4 donate food that is past its expiration date, oftentimes large corporations are hesitant to donate food that might not be safe out of fear of getting sued).

It’s a money issue. One third of all food produced globally is never eaten5, and the value of that food is more than $1 trillion. The food waste in the United States alone makes for 1.3 percent of the total GDP. It is a massive market inefficiency.

It’s an environmental issue. It takes a land mass bigger than China6 to grow the food we waste each year. And that land is deforested and degraded to the point that drives species to extinction. But the environmental problems don’t stop there — food waste also significantly affects climate change. When food waste goes into a landfill, it creates methane, which is 28 times more potent than carbon dioxide.

What if we used those surplus groceries to feed chickens?

Our solution is simple — all you have to do is buy chicken.

Instead of using energy to grow more food to make chicken feed, our solution utilizes food that already exists. We created a system that turns the food grocery stores are normally forced to throw away (and can’t donate) — into nutrition-rich chicken feed. All this creates a circular economy.

What does it mean for the environment to keep surplus groceries out of the landfill?

Think about all the energy that goes into creating food: from farming to transportation to human labor. When food is wasted, the land, water, and energy needed to grow and harvest the food is also wasted. All the transportation and processing energy and packaging is wasted. Additionally, there’s energy and carbon emissions needed to move the waste to the landfill.

But the problem doesn’t end there. Once food waste is in a landfill, it can have detrimental effects on the environment. How does that all work?

Food in a landfill releases methane, which if you remember, is that greenhouse gas that’s 28 times more potent than carbon dioxide. It’s important to note that neither of these gases are all bad — they are naturally occurring in the Earth’s atmosphere. But too much of these gases is too much of a good thing, as methane warms up the earth 28 times more than CO₂, accelerating climate change.

The science8 behind methane emission in landfills:

1. Food waste is deposited in a landfill.

2. The waste goes through aerobic (or with oxygen) decomposition.

3. In less than a year, anaerobic (without oxygen) conditions are established.

5. From there, bacteria decomposes.

The impact of Do Good Chicken on the environment

Chickens have to eat. But making conventional chicken feed, which relies on mass production of corn and soy for billions of chickens, takes enormous amounts of water, fertilizer, and land.

Every year, the American appetite for chicken produces 129 billion lb.9 CO₂e emissions per year. That’s the same amount as from 12.37 million cars.

But there’s some good news: If we stopped wasting food, about 11 percent10 of all the greenhouse gas emissions that come from the agriculture and food system could be reduced.

When you eat just one of our products, you’re saving four pounds of surplus groceries from being thrown away, thus reducing three pounds of greenhouse gases. You don’t just have to take our word for that — we got it verified independently by Ruby Canyon Environmental Inc11.

Net Carbon Calculations: How does that all work?

Our calculations use CO₂e, or carbon dioxide equivalent12, which is a standard unit for measuring carbon footprints. When we talk about climate change, we tend to focus on carbon dioxide emissions (CO₂) — the most dominant greenhouse gas that comes from things like industrial production or burning through fossil fuels.

But CO₂ is not the only greenhouse gas that causes our planet to warm up. Countless gases play a role in causing climate change — and we quantify them all in one single metric, called CO₂e. It expresses the impact of each different greenhouse gas in terms of the amount of CO₂ that would create the same amount of warming.

Now that we’ve got that straight, let’s talk about the climate impact of Do Good Chicken.

We start our carbon assessment when we pick up surplus groceries after food bank donations. When we divert groceries and upcycle them into a usable product, we attribute the avoided carbon emissions from not throwing the extra groceries in a landfill. It then becomes an input directly into the production of our chicken feed.

Too long, didn’t read? To recap…

In other words, our chicken gives retailers a major opportunity to meet — maybe even exceed — food waste production goals. In turn, you get an affordable option for lunch and dinner that makes a difference for the planet.

Do Good Chicken is an easy way to make a difference.

Chicken is one of the best proteins you can get for the planet. While plant-based products are increasing in popularity, meat consumption is on the rise. In fact, America has the second-highest meat15 consumption in the world. But it’s not the burgers you’re imagining. Surprise: it’s chicken. The average U.S. consumer eats approximately 98 pounds16 of chicken per year.

Consumption of chicken and pork is expected17 to keep rising, while Americans are expected to eat smaller amounts of beef and turkey over the next 1018 years. In fact, over the last three decades, chicken overtook beef and pork to become the most commonly consumed meat product in the United States.

While plant-based meat is a great way to reduce a carbon footprint, the truth is in the numbers: Americans are not giving up real, wholesome chicken any time soon. But by being more efficient in the production of chicken and ending food waste, we can make real chicken a whole lot better for the Earth. And we’re making it as sustainable and successful as possible, through:

Easy accessibility. We put our chicken into grocery stores you know, love, and shop at every day, making it easy for you to make a great choice for dinner.
Sustainable packaging. Our packaging is made from rPET, which is made out of recycled PET containers.
A plan for expansion. These aren’t just big dreams. They’re already in action. We plan to expand beyond grocery stores, so one day you can get our climate-change-fighting chicken at your favorite restaurants.

So…what are you waiting for? Get ready to toss some chicken in your shopping cart and bake up some buffalo chicken dip. Progress is for dinner. You go grill!